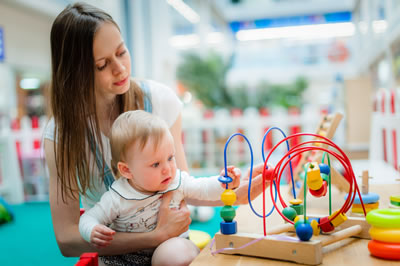 The prevalence of autism continues to grow, making it a primary concerns for new parents. The signs of autism can be difficult to spot in babies and infants. There is some debate as to whether there has been an actual increase in prevalence or if this is mainly due to a greater understanding surrounding Autism Spectrum Disorder as well as tools and techniques being developed to better diagnose the condition earlier on.

However, there is no single or straightforward means to diagnosing autism, especially in infants and babies. Babies and children develop at different rates, and reaching a specific milestone a little later in life should not be mistaken as a sign of autism. The condition is normally diagnosed in toddlers or young children when the signs and symptoms are more noticeable, however, there are some signs that can be indicative in the first year of life.

Signs of Autism in Babies and Infants

A first smile is expected between the ages of 6 and 8 weeks. By 4 months, a baby should be giggling and laughing heartily. By 6 months, they should be smiling or laughing when you do and also making an effort to repeat behaviours that make you laugh or smile. These are important milestones and if they aren’t present by the age of 1 year, could be a sign of autism.

Speech starts much earlier than most parents are aware of, often leaving them surprised at how quickly their baby is developing. An infant may say “mama” or “dada” as early on as 6 months. This is not unusual, however, a baby who does not imitate sounds by 9 months or make an effort to communicate, even if it is just babbling away, by 12 months may be showing signs of autism.

Often, before they are able to talk, babies will wave at people in greeting and perform a wide range of other gestures like pointing or reaching for items that they want. A lack of these simple gestures by the age of 12 months may point to autism as will a lack of imitating gestures that mom, dad, and other people make. Failure to follow gestures that you make may also be a sign. For example, a baby or toddler who fails to look where you are pointing or wave or blow a kiss back at you.

Commonly, the first words from a baby are mom or dad or even the name of a sibling. Failure to recognize these names and who will respond to a specific “name” is another sign of autism. A baby who does not respond to his or her own name by the age of 12 months is also a developmental marker that if missed, could be an indicator of autism.

There are two types of motor skills – fine and gross. Fine motor skills are functions that generally relate to the hands and include the ability to grab and hold onto toys in the early months and the ability to hold a pen and draw as a toddler. Gross motor skills refer to crawling, walking, running and how these functions are performed in relation to balance, spatial awareness and other factors. Missing developmental motor skill markers may point to autism.

Crawling has been identified as one of the important milestones in developing balance and coordination later in life. Skipping this milestone may not necessarily be a sign but when taken into consideration with a failure to walk by 18 months to a year, could be indicative of Autism. Babies who do not crawl before they walk are not developing faster, and it is recommended to consult with a paediatrician if a baby isn’t crawling between the ages of 6 to 12 months. Babies and toddlers who prefer to walk on their toes is another sign to keep an eye out for.

A baby who does not respond well to affection such as hugs, kisses, and cuddles could be on the autism spectrum. A baby who does not like to be held or touched or does not make an effort to be cuddled may be showing early signs of autism. This sign is another important indicator to look out for in toddlers and children later on in life.

Empathy is the ability to understand how other people are feeling and showing feelings of pity, remorse, or sadness in response. Although empathy is an emotion that is learned by toddlers and children, it does start developing earlier on. A baby may respond to a person crying or making a sad face by imitating the action – in effect showing that they are sad because you are sad. A lack of empathy is an autism indicator but may also be indicative of other social or emotional developmental problems.

A baby who shows a lack of interest in toys or in general, the world around them, may be presenting with an early sign of autism. They seem to be in a world of their own and prefer to be entertained by their own thoughts rather than interacting with their environment and others. It can also be difficult to attract the attention of a baby, toddler or child with Autism Spectrum Disorder and physical touch or turning their head may be necessary in order to get them to pay attention to you. They simply don’t seem to hear when others are talking to them.

Eye contact is an essential developmental tool, and an infant will often look lovingly into their mother or father’s eyes from the day they are born. Babies need to make eye contact in order to copy and imitate facial expressions, behaviours, and actions to learn and develop. A lack of eye contact or avoiding eye contact with others could indicate autism.

It is important to stress that these are only signs and indicators of Autism Spectrum Disorder and may or may not be present to varying degrees or may be indicative of other types of developmental disorders. It is also important not to evaluate any of these indicators independently. The diagnostic process takes all of these and other signs, relative to one another, into consideration in making a diagnosis.

Parents who are concerned that a baby may be showing early signs of autism may also want to familiarize themselves with the diagnostic process as well as eliminate other conditions or disorders that could be responsible for slow development or lack of reaching developmental milestones around the designated age. The brain is very adaptable at a young age and an early diagnosis can result in some of the symptoms of Autism not developing and can even reverse other adverse factors.

For more information on how to identify signs of autism in a patient, please consider our Autism Awareness course.  Available as part of a care subscription, www.Online-Care-Courses.co.uk offer over 100 care centric courses to care givers, nurses, medical staff and care workers.